Record-low temperatures combined with record-low inventory put a chill on housing activity in December. With very few homes available to buy, sales were down. Lack of supply and high demand continued to push prices up. Since the winter months historically bring the smallest number of new listings, buyers should not expect relief anytime soon.

While up from a year ago, home prices in general were relatively flat from November to December. In King County, the median single-family home price rose 9% from last December to $810,000. Despite high demand and low inventory, prices in Seattle continue to level off. While down slightly from November, the median price increased a modest 5% over a year ago to $839,000. The Eastside was again the outlier. After breaking price records in October and November, home prices soared 37% year-over-year to set yet another all-time high of $1,529,500 in December. That represents a 7% increase from November. In further evidence of just how hot the Eastside market is, 75% of the properties there sold for over list price. Prices in Snohomish County continued to inch closer to King County. The median home price there jumped 22% to $700,000.

The driving force affecting affordability is lack of inventory. In both Snohomish and King counties it would take less than a week to sell the homes that are currently on the market. At the end of December, Snohomish County has just 210 single-family homes for sale in the entire county. Seattle had only 167 homes for sale; the Eastside just 55. That represented 70% less inventory for both Seattle and the Eastside as compared to a year ago. To give some historical perspective, the ten-year average inventory for the end of December is 545 homes in Seattle and 743 homes on the Eastside.

Matthew Gardner, Chief Economist at Windermere, registered his concern. “The Puget Sound region is in dire need of more housing units which would function to slow price growth of the area’s existing housing,” he said. “However, costs continue to limit building activity, and that is unlikely to change significantly this year.”

The demand side of the equation isn’t expected to wane any time soon either. With millions of square feet of new office space and new light rail developments in the works, the area continues to be a draw for employers – and more potential homebuyers.

What’s ahead for 2022? Matthew Gardner expects the market to continue to be strong, but believes the pace of appreciation will slow significantly from this year. “I predict single family prices will increase by around 8% in King and Snohomish counties. Affordability issues and modestly rising interest rates will take some of the steam out of the market in 2022.”

From working remotely to finally retiring, life events often trigger housing decisions. If you find yourself looking to buy or sell a property, we’re here to help. 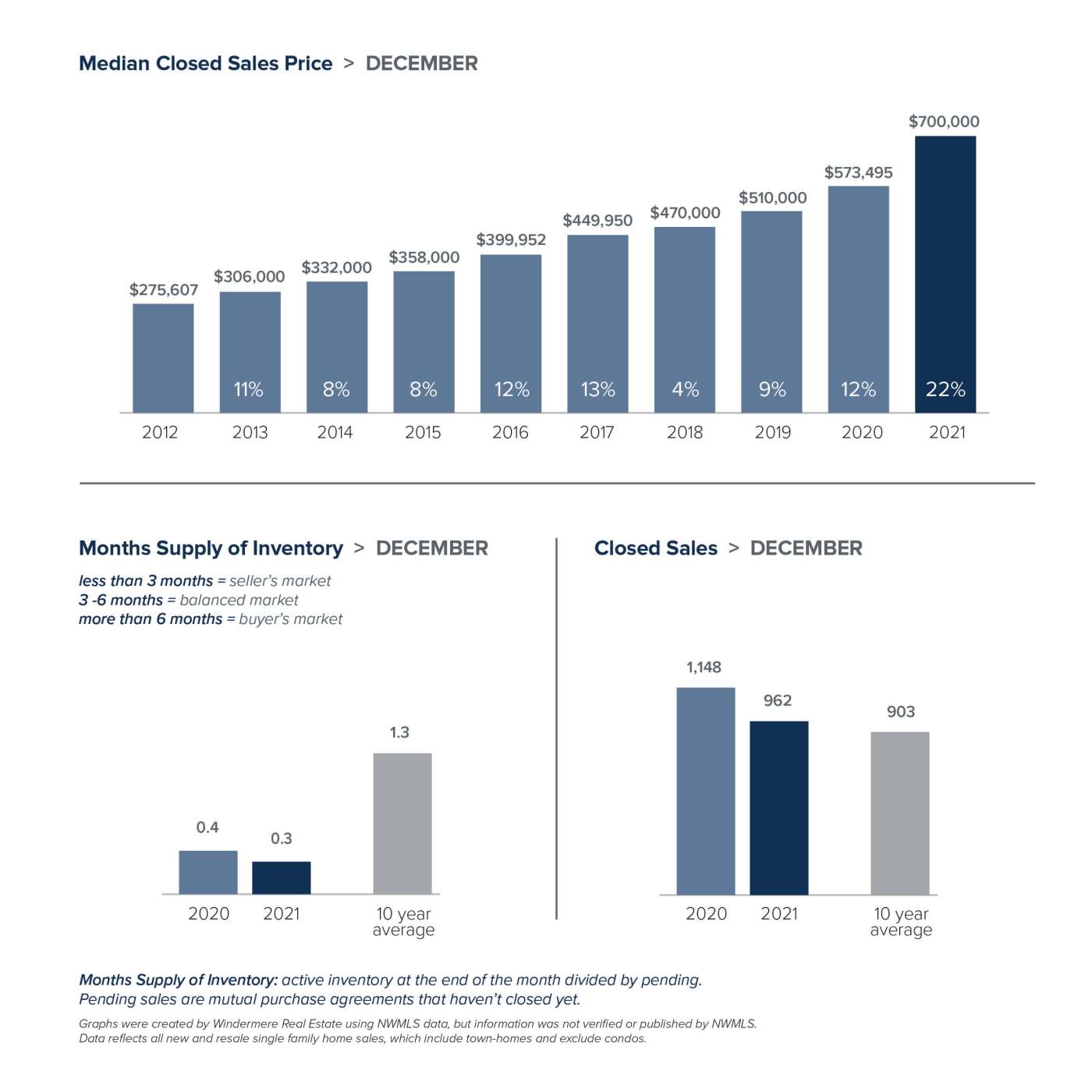